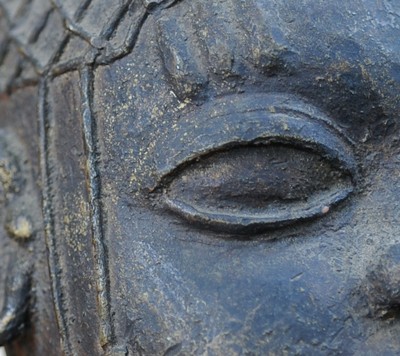 In the early 15th century in Africa to honor the passing of a Queen Mother, the Benin and Yoruba people constructed altars adorned with ceremonial pieces of tribal art. One of the most prized pieces on the altar was the Iyoba Sculpture. This tradition as well as the Queen Mother Bronze has been passed down from generation to generation from family head to family head.

The Nigerian-Biafran war started in 1967. Another tragic war much like the one going on today in Syria. Brothers killing brothers, a country fighting within itself against itself. The Nigerian war was a tragedy of epic proportions as over 3 million people died. In fact, Doctors without Borders was started because of this war. The Nigerian-Biafran conflict was the direct result of economic, ethnic, cultural and religious tensions. And primarily because Biafra was threatening to secede and eventually went on to declare itself as an independent state. When the world could no longer stand by watching idly as the tragedies unfolded before their eyes, people from all corners of the globe started getting involved. Foreign mercenaries, former war heroes and even European Counts. My father Edward Cornely was asked to head the Red Cross’ efforts to get desperately needed medicine, emergency supplies and food into Nigeria and Biafra. A noble charge indeed but the very people he was trying to help considered him to be a traitor because he was providing supplies to the “enemy“. Undeterred he continued to provide supplies to both sides and brought in food on pontoons up the Niger River and the Cross River to remote and far to reach villages. My father stayed in Nigeria for the duration of the war and befriended many village chiefs from both sides. One day while visiting one of his Biafran Chief friends they were surprised to hear war cries in the not too far off distance. The yelling was getting louder so my father radioed his helicopter pilot and told him to meet them at a soccer field located 3 miles away. My father and the chief ran to the clearing only to see the helicopter slowly making its descent. They looked behind them and a group of about 30 men wielding machetes, clubs and knives were quickly gaining on them. With the helicopter barely hovering above them my father grabbed one skid and his friend grabbed the other. The marauding horde reached them just as the helicopter began its ascent. One of the men managed to latch on to my father’s leg but slipped and fell while he was left holding on to my dad’s shoe. My shoeless father and his friend had to hold on for dear life until they finally reached the base camp. My father began to step up their distribution efforts until Nigeria blockaded all relief efforts to Biafra. Word got back to my father from his Biafran Chief friend that there was a bounty on his head and that he had to leave the country that night. He told my father one of his family member’s worked at the airport and would help him get on the next flight out. Then the chief handed my father a package and told him it was his family’s most prized possession. He said, it has been in our family for generations and I want you to have it. Thank you for saving my life, Mr. Cornely, I will never forget you. He then gave my father the name of his cousin and told him to ask for him at the airport. My father did as he was told and arrived right before the airport’s closing time. He found the chief’s cousin who snuck my father in and hid him inside a broom closet. My father remained locked inside a tiny, standing room only broom closet for the duration of the night. The next morning the chief’s faithful cousin unlocked the closet and my father quickly went to queue up for the next outbound flight. When my father finally boarded the plane he gave out a long sigh of relief. A few minutes after take off the pilot came on the intercom and asked if there was a passenger on board by the name of Edward Cornely. My father slowly got out of his seat and walked to the pilot’s cabin. Pale and sweating my dad introduced himself to the Captain. The pilot looked back at my dad and said, we were just radioed to turn around and return back to the airport and to deliver you to the army. My father’s eyes grew wide and he remained silent. The pilot radioed back and said “Sorry tower but we do not have a passenger on board by that name, over and out”. My stunned father returned back to his seat, buckled his seat belt and then looked down at the package the Biafran Chief had given him. He put it on his lap and slowly untied the twine and unwrapped the package. He stood there for what seemed like an eternity staring back at the Benin Bronze, mesmerized by the beauty and austerity of the Queen Mother looking back at him.

The Queen Mum has been my inspiration since the day I laid eyes on her when my father finally returned home after having been away for 2 years. You can feel the protective love she has for her people. You can also sense her pain for all of the unnecessary deaths.

Here’s to all of the fallen civilians, volunteers and humanitarian aid workers. And may this be a homily to all of the torch bearers past and present who have dedicated their lives under the direst of circumstances for the betterment of humanity. And may every action we take moving forward be done bearing in mind that the Benin Queen Mother, Gaia and Mother Earth will be forever watching us.