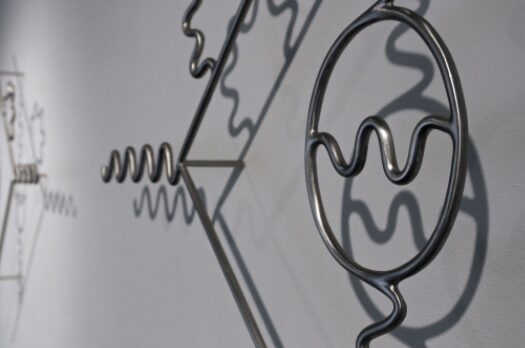 We are living in a truly unique historical moment in time where computers are bound by laws of physics. Primarily because bits and qbits are physical entities and computers are essentially manipulating matter via math, in particular linear algebra. Math, the universal means of communication, is the mother of all languages.

Prior to the emergence of quantum mechanics, classical physics was marked by a paradoxical dualism. On the one hand we had electric and magnetic fields governed by Maxwell’s equations. These fields filled space and were continuous. On the other hand atoms were governed by Newtonian mechanics, and atoms were super small objects. At the core of this dualism was the contrast of light and substance, a field that has fascinated scientists for millennia.

The benefit of quantum field theory is that it has replaced this dualistic view of matter with a unified one where quantum mechanics and special relativity are just as equally important. We have learned that we can make fields from photons and atoms from electrons. And both photons and electrons can be described using mathematical formulas. They are particles because they come in discrete units with definite, reproducible properties. However, the new quantum mechanical particle (“quarticle” as coined by Frank Wilczek) cannot be associated with a definite location in space. Instead the possible results of measuring its position are given by a probability distribution which is the square of a space-filling field (ie the wave function).

We have the kingdom of bosons, named after Satyendra Bose and the kingdom of fermions, named after Enrico Fermi. Both names were coined by Paul Dirac. Nota Bene: Every species of quarticle is either a boson or fermion. Interactions among bosons are different from fermions. This effect is called quantum statistics. Bosons are like “conformists” because they like to behave in the same way. A photon (which belong to the kingdom of bosons) is akin to a laser beam because it consists of many photons of the same wave length that move in the same direction. Conversely, fermions are “individualists” because they refuse to occupy the same quantum state (otherwise known as the Pauli exclusion principle). Electrons belong to the kingdom of fermions and is one of the reasons why the periodic table exists. Electrons being negatively charged are attracted to positively charged atomic nuclei where they build up complex configurations around it.

If we really want to understand the personality of a material (ergo the periodic table) we will need to study its electrons more closely. Table salt forms cubic crystals because its atoms share electrons in that configuration. Silver shines because its electrons absorb visible light and reradiate it. Carbon to carbon bonds in graphene are so small and strong that they prevent thermal fluctuations from destabilizing it. Electron behavior causes nearly all material properties such as hardness, conductivity, melting temperature, etc. and they all change when extreme heat or cold temperatures are applied.

When electrons form covalent bonds (for instance hydrogen and carbon), they cannot move about independently as they are frozen in place and form a solid. However, quantum fluctuations may cause that solid to turn from a solid state to a gas, thereby producing materials in which the electrons move freely (ie electron gas). On the flip side some electrons are neither locked in place nor independent and form a liquid instead. Some of these liquids (which melt due to quantum fluctuations rather than thermal) are what is known as a quantum entanglement state. The same goes for anyons. Physicists now know of several 2D quantum liquids and 3D quantum liquid crystals whose emergent quarticles are neither bosons nor fermions, but rather a different sort of quasi anyons.

The first example turned up in a domain of physics known as the Fractional Quantum Hall Effect (FQHE). This is a state of matter that arises when electrons confined to a 2D layer (ie at the interface of two semiconductors) are taken to ultra low temperatures and subjected to extremely large magnetic fields. Under these conditions (when the density and magnetic fields are varied) the electrons form a large class of related but distinct quantum liquids which have amazing properties and become excellent super conductors.

Not too long ago a new class of quantum liquids (called spin liquids) was identified. In these materials the electrons do not move, but the orientation of their spin axis does. Spin liquids lie between ordinary magnets (spin solids), in which the direction of spins are aligned, and paramagnets and diamagnets (spin gases), in which the spin orientations are almost completely independent of one another.

Currently there is considerable excitement growing around the engineering of artificial anyonic systems. Keep in mind the basic feature of anyons (which distinguishes them from quarticles) is their memory capacity. Anyonic systems build up gigantic collective memory which serve as a platform for computing. This is known as “topological quantum computing” and Microsoft is leading the path towards building more viable quantum computers via topological braiding. Essentially a topological quantum computer is a computer that employs 2D particles called the Majorana Fermion (which has its own anti particle), who pass around one another to form braids in 3D spacetime (ie one temporal plus two spatial dimensions). The benefit of knots via braiding is that it produces less noise which helps stabilize quarticles.

Recently condensed matter physicists discovered new exotic phases of matter and these emergent, collective states of interacting particles are nothing like solids or liquids. These phases (some realized in the lab and others in theory) arise when matter is chilled to sub-zero temperatures. In these frigid conditions particles can interact in ways that cause them to shed all traces of their original identities. Experiments in the 1980s revealed that in some situations electrons split en masse into fractions of particles that make braidable trails. In other instances they collectively create massless versions of themselves. A lattice of spinning atoms becomes a fluid of swirling loops. Crystals that began as insulators start conducting electricity over their surfaces. One phase that shocked scientists in 2011 features strange, particle like fractons that lock together into fractal patterns. The need to enumerate and classify (and in some instances reclassify) all possible phases of matter is an area that needs some attention. If a complete classification is achieved, it would not only account for all phases seen in nature thus far, but would point the way toward discovering new materials and ultimately new technologies. IBM Research is already setting world records by using their quantum computer to simulate beryllium hydride, lithium hydride, and hydrogen molecules.

In February of 2018 scientists discovered another new exotic state of atoms — an atom within an atom (Bose-Einstein condensate using strontium atoms that convert to a rydberg atom using a laser)! Scientific breakthroughs such as these are accelerating because of quantum computers.

Case in point: Now is the perfect time to take a fresh look at our current periodic table of elements which needs to expand on enumerating phases of matter that still remain unexplored.

Today we have the capacity to bend technology to create mini universes. My hope and desire is that we leverage bits to manipulate atoms that will ultimately improve lives.